I made the jump. Went from looking to using. From being intimidated by, now being inspired by.
I started w 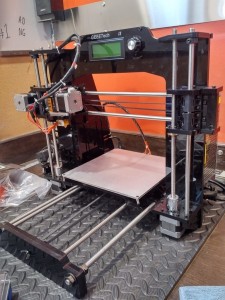 Before I built the case around it. 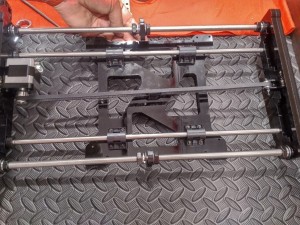 The start of the base, or Y axis

ith an idea. One that required me to “make” something in order to test it. Well the only place that had a 3D printer was a friend in Calgary, and a community maker space downtown where following another persons concept of teaching didn’t seem attractive.
I tend to work best at my own pace.
The one where your eyes roll back in your head and you come out of your trance and have built something that works.
So I pulled the pin and ordered a model after doing my usual research.
A few weeks later a very heavy box that was filled with motors, acrylic plates, wiring harnesses, and about 50 bags of nuts/bolts/washers/springs and various other parts.
Not for the faint of heart.
If you didn’t like Meccano, and were more of a Lego kid, you may not enjoy the build. Let someone who likes it, do it.
I happen to enjoy this stuff. You build enough RC Heli’s from bags of stuff, you get used to the detail needed.
As an added bonus, you get no manual.
You download a version of it, translate the “Chinglish”, watch lots and lots of videos, and then jump in.
Of course some stuff was wrong, parts that were different than any examples, firmware that was not setup properly.
Well with the help of someone who had a version of the same printer, I was able to get it dialed in.
Now lets get everyone up to speed on how these things work.
We will keep it to the building blocks so you get a general understanding of how these things create. 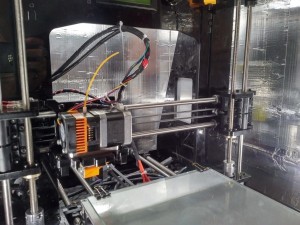 Shot of the extruder, horizontal bars that support the X axis, and the rods/long screws on either side that lift the assembly for the Z axis. The glass covered base moves forward and back, and is the Y axis.

So think of a glue gun. You push a glue stick in and when you pull the trigger, well glue comes out.
So if you were to turn that glue gun down, hold it close to the floor, and with the right amount of pressure and consistency, you could stream a nice line of glue. Then if you let it dry, you could stream another one on top of the first, and so on.

Well, that is the basic principle.
One major difference is that the hole that the “glue”, or filament gets extruded through, is .3 of a mm. Yup, ten mm to a cm, so those are the little tiny marks on most rulers. Well the hole is .3 of that.
About the diameter of the smallest guitar string.
The glue is pushed by a motor and gear that knows how much to push to keep things even.
It is also heated up to around 200 degrees Centigrade, and moved to points with the same accuracy, about .1 of a millimeter.
So a model is something that we want to print. It can be something that was scanned in 3D, or something that was designed in a CAD program. There are millions of free designs for everything from vases, toys, mounts, even cell phone cases. 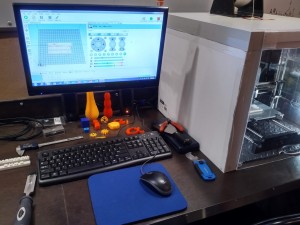 Our printing station, with computer, design ability, and some printed items near the keyboard.

The fun for me comes from being able to take an idea, and print it out.
Not a picture, but a “thing”.
That is pretty cool.
So your model gets cut up into layers, or slices, that are fed to the 3D printer a layer at a time, so that the first layer gets printer, then it moves up just a bit, does that layer, and so on until all those layers create your 3D model.
The items you see in the pictures were all printed, and in some cases designed, at our office.
We can customize our own marketing material.
Make mounts for drones.
For well under 1000 dollars, and a commitment of time, you can get into something that is still in it’s infancy.
Not everyone will be able to do all aspects. Build, program, design, maintain, just to name a few.
But if you do even a few of those, then you will find something to keep you busy in this new field.
It has opened up possibilities that were the reach of only a select few years ago.